Two neighboring nations living side by side were dispersed to different sides of the barricade because of the Nagorno-Karabakh conflict. The armed confrontation was followed by an informational one.

In fact, there is nothing reprehensible in the willingness of the two nations to represent their point of view to the world community and give proofs in their favor. However, when the basic rule of inadmissibility on using falsification as a proof is violated, even if it intends to intensify the impression of the user with the help of other materials (photos, video materials, agreements, documents, letters, etc.),it is irrelevant to speak about the authenticity of other facts. In this case it is evident that the whole propagandistic “dance on bones” doesn’t strive for the victory of justice, but pursues solely defamational goals.

It happened so that the Azerbaijani side, feeling an urge to have its “personal” genocide (not a bit worse than their neighbors have), undertook multishift and multifold actions to fix some dates on the calendar as the days of a genocide against Azerbaijani (azerbembassy.org.cn/rus/31march_docs08.html).

During the war in Nagorno-Karabakh, the civilian population was repeatedly exposed to armed attacks, and in some cases, to pogroms and slaughter. Among the most well-known episodes could be mentioned the following: the murder of Armenian civilian population in the village Maragha in Nagorno-Karabakh, the ethnic purges of Armenians in Nakhijevan Autonomous Region, in the Azerbaijan SSR, in particular, the pogrom of Armenians in Sumgait (February 26-29, 1988),in Kirovabad (November 21-27, 1988, and in Baku (January 13-19, 1990), the killings of civilian population in Stepanakert, fired at by facilities “Grad” from Shushi and Khojaly.

However, the killings of rural population of Khojaly in the February of 1992, when at night the inhabitants of the settlement were leaving for Azeirbajani town Aghdam, is, undoubtedly, an episode having more publicity. The Armenian side claims that they were given the opportunity of a free corridor, while the Azerbaijani side denies this fact. According to the Azerbaijani side, 613 people were killed on those days.

This very occurrence differs from others, first of all, by the fact that the Azerbaijani side fully controlled the territory where the Khojaly inhabitants were killed and had the opportunity to make an unimpeded and unrestricted survey not only of the very spot but also of the dead, by taking photos and video filming. In particular, Azerbaijani camera-man Chingiz Mustafaev, found himself in the place of the death practically straight away and it is his materials that underlie all the documentary materials on Khojaly.

After the defeat in the war with Armenians, a process of formation of national identity began in the present Azerbaijan. In this scheme Armenia and Armenians became the main antagonists. In the process of modeling of the national self-consciousness, the Khojaly events were declared as one of the several genocides against Azerbaijani, though, it is absolutely evident that the Khojaly events, by no means, fall under the category of genocide. In spite of this, Azerbaijan, on a governmental level, is engaged in presenting the Khojaly events as genocide: at the Web Site of the president of Azerbaijan there is a section devoted to a number of genocides against Azerbaijani, including “the genocide in Khojaly ” (http://president.az/browse.php?sec_id=56). There are sections on the “genocide in Khojaly” at the Web Sites of Embassies of Azerbaijan Republic to different countries as well. All this is an evidence of the great role of the Khojaly tragedy in Azerbaijan state propaganda.

Images From the Kosovo War Used 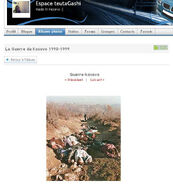 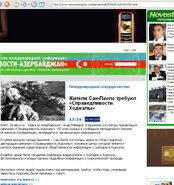 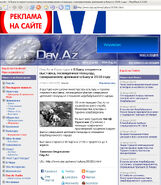 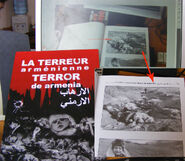 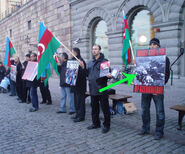 Kosovo used in protests and rallies 1

Kosovo used in protests and rallies 2 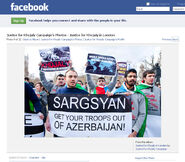 Kosovo used in protests and rallies 3

Kosovo used in booklet, distributed by the Embassy of Azerbaijan in Kuwait 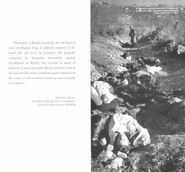 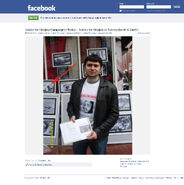 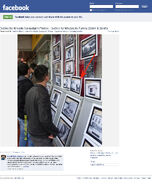 Images of Dead, Injured, and Displaced Children from Other Events Used

This photograph of a child “tortured and killed in Khojaly by Armenians” is largely disseminated as a factual material used as an indication of “brutality” of Armenians.

“The dead Azerbaijani child on the Khojaly roads” for some reason appears in A. Orekhovski’s reportage “A Long Way to Erkech” published in the newspaper “Komsomolec Kuzbasa” on January 25, 1991.

However, the validity check showed that the photo has no connection either with the “Komsomolec”, or with “Khojaly : in these photos taken by the reporter Oleg Litvin are the victims of the act of terror in 1989. The pressman of the agency 1news.az (actively using falsified photo-materials in his video-projects) Rizvan Guseinov, with great zeal threw himself to unmask Armenian “falsifiers”: «rizer001 wrote: ( Pigh's blog) Dec. 31st, 2009 01:44 pm (UTC) Komsomoletc Kuzbassa

thank you, dear, I have been looking for this copy for a long time!!! now we will know the primary source of falsification made by Armenians in the photo of the Azerbaijani child, the victim of the act of terror in 1989 made by Armenians” (the style and the spelling of the original are preserved).

However, the “unmasker” didn’t take into account a couple of delicate and principle issues, that is: a) the child who was burned during the act of terror in the bus in 1989, can by no means be a victim of “Armenian aggression” in Khojaly. And “the facts” with the help of which he reveals the “Armenian terrorism” are falsified; b) the Armenian side has no connection with the newspaper “Komsomoletc Kuzbassa” and its reporter A Orekhovski. We’ve just placed in the Web the scanned copy of the newspaper with the reportage and the photo. Consequently, it is groundless to blame Armenians in stealing the “icon of falsification”, the Azerbaijani boy. The most striking and important thing in all this is the following: The child photographed in 1989 can by no means be a victim of events at Aghdam-city, at night on 25-26th of February, 1992.

Alve injured boy, in two perspectives, which proves the authenticity of the photo 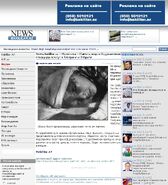 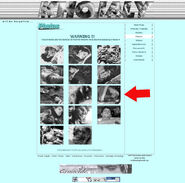 Injured child of 1989 terror attack used in booklet, distributed by the Embassy of Azerbaijan in Kuwait 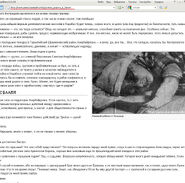 A. Orekhovski’s reportage “A Long Way to Erkech” published in the newspaper “Komsomolec Kuzbasa” on January 25, 1991.
Add a photo to this gallery

In vain attempts to blemish and accuse Armenians of falsification, the correspondent of 1news.az Rizvan Guseinov paid no heed to the fact that he himself admitted that they had made falsifications themselves, since, at the very least, it is improper to produce a photo taken in 1989 as a photo of a victim taken in 1992.

In other words, the time, place, events and the accusations do not have anything in common with each other.

A very interesting fact: this photograph is present in the “video-chronicle”by Chingiz Mustafaev, though it is known for certain that it has no connection with it. An impression is gathered that the Azerbaijani propaganda purposefully discredits its only authentic evidence of the very events taking place at Aghdam-city. 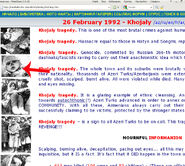 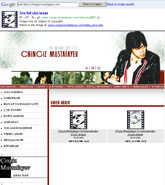 Injured child from 1989 used in Chinghis Mustafaev's memory website
Add a photo to this gallery
Retrieved from "https://khojalygenocidetruth.fandom.com/wiki/Forgery_and_Falsification?oldid=4085"
Community content is available under CC-BY-SA unless otherwise noted.